Big Willy - All In 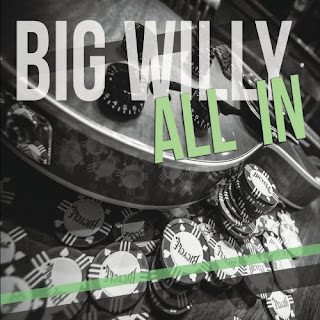 Big Willy, the band is one of the Mid Wests most original bands with elements of, blues, rock, funk, and second line. Influenced by Stax, Motown, Muscle Shoals and various Blues and Rock studios, blending it all into an Americana mix of original songs, with catchy riffs and thought provoking lyrics. Tracks include a couple instrumentals inspired by our trip to Memphis to compete in the International Blues Competition and a tour of Stax, as well as vocal selections from guitarist, singer, songwriter, Will Rideout. Ride outs guitar playing is energetic to soulful and featuring a lot of slide guitar on this album. His lyrics are self reflecting, from pensive to joyful to declarations of adoration. The band features, Mike Smally on bass, funky, powerful when needed, delicate when needed and most of all tasty; Will Metz on saxaphone, sonorous, rhythmic and knows how to make a moment in the song; Eric Payne aka (the doctor) on drums, at home with rock, funk, jazz, and blues, brings a dynamic punch to the songs. That's the core of the band. On several tunes we had our honorary member, Mike Lynch on keyboards join us, bringing a wall of sound behind us on the Hammond B3 or rhythmically funky on the Wurlitzer. On two tracks we felt we absolutely needed some horns and had Shawn Bell on trombone and Brad Fowler on trumpet , come in to punch those tunes up. This is Big Willys third album and we think the best to date. Enjoy! .............. The other two albums , King without a Crown and out for trouble, also available.