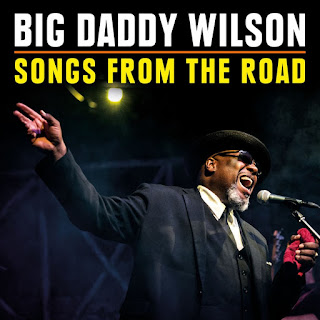 No matter where Big Daddy Wilson travels on this big, beautiful, mixed-up planet of ours, he takes the South with him.
Listening to the soulful storytelling of the man born Wilson Blount in a small town in the Inner Banks region of North Carolina, it's impossible not to conjure images of dusty back roads, cypress groves, a Saturday night juke joint or Sunday morning revival meeting. It's a nostalgic and – some might say – glorified image of rural America. Yet in an age of ruthless demagogues and divisive politics, Big Daddy Wilson chooses to celebrate the simple things that bond us as human beings – a smile, a shared meal, a helping hand – along with cherished values like faith, perseverance and devotion to family. For more than two decades, he has been carrying his message of hope and unity to each and every show, whether in New York, Paris, Auckland or – in the case of his new live album Songs From The Road – the village of Rubigen in central Switzerland.
The concert recorded at the Muhle Hunziken exemplifies Wilson's uncanny ability to connect with an audience. The key ingredients are honesty, his natural charisma and the sheer power of his voice. This performance from the fall of 2017 is a testament to just how far the American ex-pat and former soldier has come since answering a newspaper ad and summoning the courage to sing "Stormy Monday" for a group of young German blues musicians way back in the 1980s. He's ably supported by a tight and versatile four-piece unit comprising Cesare "Smokestack" Nolli (g), Paolo Legramandi (b), Nik Taccori (dr) and Enzo Messina (k). A band that backs Big Daddy Wilson always has to be at the top of its game, because his music isn't any one thing. From song to song, it may transform into something hard-driving or laid-back, funky or bluesy, joyful or brooding, stripped down or supercharged.
"I tried to give my listener a small view of the journey, the good, the bad, the highs and the lows," explains Wilson in the liner notes to the album. He and the band open the set sounding figuratively uptown: "Wake Up" is a steady grooving call to action, "Drop Down Here" a reggae-tinged plea for help from the man upstairs, "Miss Dorothy Lee" a guitar-fueled tribute transported on a Bo Diddley-like rhythm. The bawdy blues of "Texas Boogie" gives way to the dead serious testifying of "Ain't No Slave." Then it's time for a little side trip to the countryside: "Anna Mae" and, later, "Cross Creek Road," are sun-drenched and pastoral. The band picks up steam again on "Neckbone Stew," ultimately climaxing with the earthy "Baby Don't Like." The twelve-song live CD closes with the eloquent simplicity of "I Just Need A Smile."
Some years ago, Big Daddy Wilson told an interviewer that the main reason he wears sunglasses onstage is his inherently shy nature. "I'm no entertainer," he claimed at the time. Songs From The Road delivers some pretty strong evidence to the contrary. And yet, in a certain way, he's right. Wilson's music – like Wilson himself – is real. It's honest. At no point is this man ever putting on a show. "I’m just interested in singing, getting my message out and feeling the people – and hoping I can make them feel me."