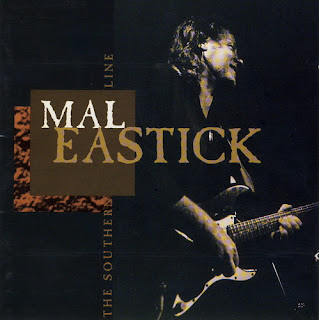 Guitarist & song writer Mal Eastick hails from Australia. To my knowledge, he has not toured the US, nor is his music available outside of Australia. Too bad, because I'm sure his music would be well received here, or anywhere there is interest in blues-rock, blues, and rock ballad type music. Mal is a very talented guitarist, and singer John 'Choc' Eriwata does a fine job on vocals. The entire band is tight and well balanced.
The Southern Line is composed of about half blues-rock, half ballads & light rock tunes, and one slow blues intrumental. Mal wrote or co-wrote ten of the eleven songs. The ballads are well done and enjoyable, but there are a few too many. My favorite songs from the CD are the blues-rock and slow blues tunes.
Don't Take Advantage Of Me is upbeat blues, and the only cover song on the CD. You've probably heard this song covered by a few others. On Jumpin' With Stevie Mal tips his guitar to SRV. This is a blues-rock instrumental with Stevie overtones, including some nice work with wah-wah effects.
Two Loves is a soulful blues intrumental, with some very nice guitar and piano solos. Hearing this song on the internet motivated me to go through the effort of locating and ordering this CD from an Australian online music store. In the quick paced instrumental, The Double 'EE' Boogie, Mal trades licks with fellow Aussie guitarist Tommy Emmanuel. Of the ballads, I like Boundry Rider
the best, it's played and sung with a fair amount of emotion. In my view, if there were a couple less ballads, and a couple more blues tunes, The Southern Line would be an outstanding CD. As it is, it is still very good, and I recommend it to anyone who likes a blend of ballads and blues.