Mike Griffin & The Unknown Blues Band - Gimme What I Got Comin' 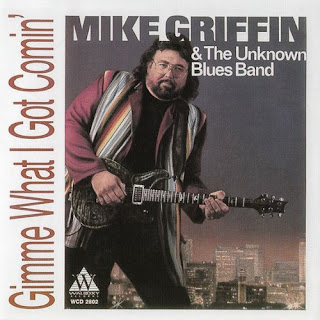 Gimme What I Got Comin' (1993) brought the band further acclaim as a solid force on the blues scene. The album grabbed the attention of blues fans, critics, and DJs and snagged a high-ranking spot on Living Blues Magazine's national radio chart.
Fifth of Whiskey, Case of the Blues, a song from the album, was nominated as Song Of The Year for the 1994 W.C. Handy Awards.
Major touring dates on both U.S. coasts and Canada, as well as Europe, served as a catalyst to broaden the fan base for the band. Griffin also played on the month-long "Malaco Europe '93" musical extravaganza, where he shared the stage with legends like Little Milton, Denise LaSalle, and Latimore. He then worked with Artie "Blues Boy" White, laying down tracks for his "Different Shades of Blue" release, as well as providing explosive guitar work on James Peterson's "Don't Let The Devil Ride" album.